The Town will do one more round with the leaf vacuum beginning TUESDAY, NOVEMBER 13th

The first two in a series of public meetings to address the Long-Range Transportation Plan will take place on
November 7
noon-2:00 PM and 6:00-8:00 PM
at the Tompkins County Public Library in downtown Ithaca.

“Public input is essential for the success of this effort,” stated Fernando de Aragón, director of the ITCTC. “Every five years we update our long range transportation plan. Once again we have the opportunity to help forge a vision for Tompkins County. The plan offers the opportunity to focus on the role of transportation strengthening our local economy, encouraging a healthy lifestyle and promoting equity in our community. Of course, we also recognize the great impact of the transportation sector in issues like energy consumption, air quality and climate change. How we deal with transportation locally can play an important role in addressing these challenges.”

You can view both the current transportation plan and draft materials for proposed update at the ITCTC web site: www.tompkinscountyny.gov/itctc.

Topics covered by the Long-Range Transportation Plan include:

For additional information or to provide your input you may contact the ITCTC at 274-5570, email itctc@tompkins-co.org, go to the agency web site at www.tompkinscountyny.gov/itctc, or visit the ITCTC on Facebook.

The Future of Home Heating and Cooling –
HeatSmart Can Take You There Today!

With heating needs in winter, cooling and dehumidification needs in summer, home comfort requires control over air temperature just as you control water temperature at the tap (and heat pumps can become your best water heating option too!). Heat pumps are a tremendous advance because they can heat, cool, and dehumidify your home with significant energy and cost efficiency, all with the push of a button. Heat pumps work at all temperatures and, unlike oil, propane or natural gas heaters, they do all those things with minimal environmental impacts.

But most of us don’t know much about heat pumps, and a lot of what people think  that they know is outdated or inaccurate information. We may know enough to be interested, but still not feel we know enough to understand the personal benefits of installing these new systems in our homes.

HeatSmart, which had its origins here in Tompkins County a few years back, is a non-profit community organization devoted to increasing home energy efficiency, saving people money in a great many cases, and reducing the whole community’s carbon footprint. Staff and leadership at HeatSmart endeavor to provide simple information on the effectiveness, personal economic benefits, direct health benefits, and community environmental benefits of adopting heat pumps. HeatSmart can help you choose between different options with confidence and reap the benefits.

You can find a full list of meetings and also home tours on www.HeatSmartTompkins.org

The County Legislature invites county residents to comment on the County’s proposed 2019 budget and five-year capital plan at a public budget hearing to be held Tuesday, October 30.

The hearing will begin at 7:00 p.m. at County Legislative Chambers, located on the second floor of the Governor Daniel D. Tompkins Building, 121 E. Court Street, Ithaca.   The public hearing is the official opportunity during the budget process for the public to provide input on the budget.

The Tentative Budget, amended by the Legislature from the recommended spending plan presented by County Administrator Jason Molino, would increase the County tax levy by 1.54%.  The recommended tax rate of $6.40 per thousand is down by 18 cents from 2018, representing an increase of $13.90 in the tax bill for the median-valued $185,000 home.  A $3 increase in the County’s annual Solid Waste Fee, to $58, is also recommended.  The recommended tax levy increase falls below Tompkins County’s State-calculated 2019 Tax Cap.

The 2019 Recommended Budget and the amendments adopted by the Legislature may be found online at the budget page of the County website at www.TompkinsCountyNY.gov/ctyadmin/2019budget.    Paper copies of the budget are available at the County Legislature office and at County Administration, 125 E. Court Street, Ithaca.

City of Ithaca staff and consulting engineers will host a public open house style meeting for The Hector Street Complete Street Project on Monday, May 7, 2018 from 4pm to 6pm in the cafeteria of Lehman Alternative Community School at 402 Chestnut St, Ithaca, NY. The open house will showcase the current draft proposals for the corridor that were developed based on the City’s grant application, which was awarded by the NYS DOT in June 2017.  Erdman Anthony, consultant engineers, are currently working on an updated plan that will be presented at the public meeting.

The study area covers the portion of Hector Street (also known as Route 79), from Floral Avenue (Rt 13A) to 500 feet past the City/Town boundary line. Improvements to pedestrian conditions intend to connect to an existing path at Linderman Creek Apartments. The proposed goals are to extend the current sidewalk along the street, to enhance conditions for bicyclists, and to add 2 bus shelters along the corridor.

In addition, The City of Ithaca Engineering Office is soliciting public comment on the draft design report which is posted in the link below. Written comments can be submitted to Johnathan Licitra at JLicitra@cityofithaca.org, hand delivered, or mailed to the Engineering Office in City Hall, 108 East Green Street. Comments will be accepted until May 30, 2018.

The City of Ithaca has received $1,400,000 in federal funding assistance for a $1,700,000 project to enhance pedestrian, bicycling, and bus conditions and to improve safety along Hector Street (Rt. 79) between Floral Avenue and 500 feet past the City line towards Linderman Creek Apartments.  Key goals of this project include:

These funds were made available from the Federal Highway Administration’s Transportation Alternatives Program and are administered by the New York State Department of Transportation. The funds cover 80 percent of the cost of each project, with the remaining 20 percent coming from the project sponsor. Final engineering is scheduled for 2018 and construction is scheduled for Winter and Spring 2019.

Everyone is invited to participate, and to encourage that, I have received gift certificates from several West-end businesses to give out as prizes for participating. Businesses include (but are not limited to) Maxie’s, Rasa Spa, Taste of Thai Express and Agway.

Not all the details are worked out, but tentatively: people may meet ahead of time to have a snack and get organized (I am trying to arrange to get a room at LACS for this), post odd finds and other shenanigans to a Facebook Page during the day, and then possibly gather afterwards at a local business.

As with past years, trash bags will be available at several locations and can be left on the side of the road, where they will be picked up and hauled to the dump by George McGonigal. If participation is sufficient, I would like to organize people to focus on the major West Hill arteries (rt 96, rt 79, Elm St and Floral Ave).

Greg Perreault and Genie Herme were on WRFI radio this past week to talk about their misgivings on the State/Hector bridge changes. The audio is available here: 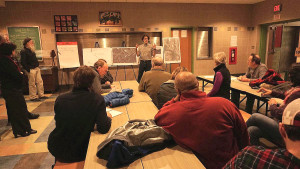 The turnout wasn’t big, but participation was high at the public information meeting regarding the rebuilding of the Brindley Street bridge and the revisions on the State/MLK bridge over the flood control channel. Tim Logue (the city’s transportation engineer) explained what was on the table and the preliminary planning that has been done. Roughly, the favored course seems to be, said Tim, to transform the Brindley St bridge to bike/ped use and build a new bridge to align Taughannock Blvd with Taber Street. As part of the changes, the four lanes on the main bridge would be reduced to make room for more comfortable pedestrian and bicyclist use. Special consideration is being given to provide ways for pedestrians to cross State/MLK not only safely, but without undue anxiety about traffic.

Several attendees expressed reservations about reducing the number of lanes on the State/MLK bridge as well as to the effect of changes on what is seen as needed growth in traffic, particularly traffic by large trucks. Local businesses depend on this. There were others who felt that non-motorists’ needs were unmet in that area, and that motorists would be asked to sacrifice little or nothing in order to create safe foot and bike passage.

Tim Logue said that he would be able to compile quick responses to the questions and suggestions raised during the meeting so that we can maintain an ongoing conversation toward the best solutions for everyone.

This is just scribbled from my so-called memory so that our community website can have the event recorded and so that we have a point on which to comment further. Please add any corrections, amplifications, etc.

Greetings.  I hope the new year is treating you well so far.
I am checking in to provide a brief and by no means comprehensive update about what is going on around town and in the First Ward…
A meeting for residents of the Stone Quarry / Spencer Rd. / South Meadow St. neighborhood will convene soon to discuss potential traffic calming and re-alignment options.  The meeting is tentatively set for February 11th, at 6 pm at the church on South Meadow St.  City traffic engineers and Common Council reps will be there.
I will let everyone know as soon as the time and place is confirmed.
On the west side of the First Ward, a number of changes, large and small, are in the works.
Two vacant houses on Cliff St., 235 and 207, are going to be torn down. It is not known what will rise in their place.
There are plans moving forward to replace and perhaps relocate the Brindley St. bridge, and to realign Brindley St. itself.  Public outreach is planned for the near future but has not yet been scheduled.
Traffic patterns on West State St./ MLK Jr. St are also being studied for a possible change that would reduce the number of lanes for automobiles from 4 to 3, and widen the space for pedestrians and bicycles.  This potential project will also seek plenty of public input.  Dates and times for the first meetings will be announced soon.
On South Hill, I suspect that many residents are talking about the fact that Campus Advantage has apparently withdrawn its revised, scaled-down proposal for the Trebloc site at the east end of the Commons.
I am curious to know what people think about this turn of events.  I am also wondering how people feel about the possibility of re-examining the zoning for this area.  If residents do not want a future project that is of the same scale and height as the initial Campus Advantage proposal, then the only way to avoid this likely possibility may be to change aspects of how it is zoned.
What do you think?
That’s all I’ve got for now.  More detail later.  Please feel free to contact me at this e-mail address or on the phone at 272-0639.  Have a good one.
George McG
George McGonigal
Common Council, First Ward
tel: 272-0639