Yesterday was Bike to School/Work Day in Ithaca and, following the pattern started last year, we had a “breakfast station” at the foot of West Hill to feed anyone who passed by bike or on foot. This time, we had to enlarge our criteria, as one commuter arrived by canoe on the flood control channel. It was a wonderful day that brought us more than twice as many visitors as last year.

It was one of those glorious spring days that we fix in our memories as characterising Ithaca and this wonderful Finger Lakes region. Blue skies, leaves almost fully emerged, lilacs flowering and filling the air with their scent and, of course, the yellow of forsythia everywhere — even though at 6:30 am the temperature was a bit chilly, you could tell that this was the beginning of “one of those days” that keep us living here. By 7:30, the first bicyclists were beginning to arrive and partake of the Collegetown Bagels fare provided by the Finger Lakes Cycling Club. Within minutes, the chocolate chip muffins — each a meal in itself — donated by Green Star arrived, together with coffee, orange juice, and water from Wegman’s. And, from that point on, we never had an idle moment for two hours. We quickly lost count of visitors, but, based on raffle tickets filled out and muffins consumed, it seems that something between 60 and 75 souls visited us at least to say hi. 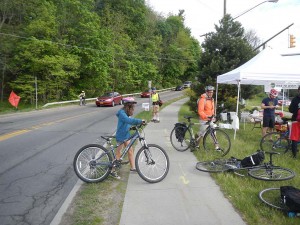 We were located on the bit of grass between Hector St and Cliff St where they come closest together — in a line between Elm St and Park Rd. It’s a patch that can be seen and accessed from either Hector or Cliff, and we had bicyclists approach us from both directions — sometimes speeding past while waiting for an opportunity to slow down and leave the roadway.

As a 24-year resident of Cliff St and frequent traveler through this intersection, what I found most wonderful about this event was the number of children that we saw here. In the middle of some of the most hostile traffic in the whole Ithaca area, we had kids on bikes and in trailers arrive with their parents, taking this special opportunity to travel through and linger in this tangle of roadways. It was such a joy to see youngsters enjoying their neighborhood, their bikes, their greenspaces in this “octopus” region that has become a no-man’s-land for non-motorized beings. Only a few hundred yards from the great turtle of the Children’s Garden, this place was normally completely inaccessible except to be passed, at high speed, in a car. It filled me with the urgency of returning the foot of West Hill to us, to our children, to the life of the people who live here.

Talking with many of those who stopped by, we heard the same sort of views repeatedly: this is a dangerous place, we wouldn’t let our kids ride through here, this area is not safe for anyone, especially for kids. For this special occasion, parents took the situation in hand and managed to reach the “breakfast station” safely. It was clear that things would have gone better if we could have had some of those mid-street poles that say “New York State Law: Yield to Pedestrians in Walkway.” As bicyclists slowed down and looked for a chance to cross over to us, particularly on Hector Street, cars continued in steady streams, ignoring what seemed like the obvious needs of pedestrians. True, there are gaps in the streams of cars, but sometimes those gaps are very far between — and when they arrive, there is often traffic in the opposite direction. Seeing this many cyclists stopping and visiting our oasis really brought out how uncomfortable the area is for anyone not in a car.

I can’t help wondering why it should be like this? This is one of the beautiful parts of the city — the Flood Control Channel, the Waterfront Trail, southbound trail to be added soon toward Buttermilk Falls — it should be a place we can relax, walk around, and let our children enjoy the place we live. Can it be that, for a car coming into Ithaca on Hector Street, it would be a problem to stop once at Floral Avenue? During rush hours, it would have to stop anyway at Fulton; a brief pause at Floral wouldn’t affect their eventual ETA. Getting traffic to pause at that point would calm that unrelenting stream and give people the opportunity to cross whenever they want — just cross in front of the next car! With slowed traffic, kids might be able to ride their bikes from the Waterfront Trail up to LACS — or from LACS to the library!

It seems to me that we have accommodated the quick passage of cars to the point of sacrificing our own surroundings, making it uncomfortable to go out as adults and impossible as children. I would hope that the residents of West Hill could agree that a one-minute delay to cars during the 30 minutes in the morning that they are bunched up is not a serious problem to them. Asking that tiny concession of the motorists could begin to turn this wonderful part of the West Hill back to people and to our children.

What do you think?